Today’s post is the 9th instalment of CB and PB’s story.

The first post was Spread Your Wings .  After I wrote that post, the next two instalments (part 1 and part 2) were what happened the day Ravi left home.

Ravi left his parents home to go to a new city, a new life, a new job.

If you are new to the series, I hope you will enjoy the story from the beginning with Spread Your Wings .

Thanks for coming along. ♥ – David

Photo by Brett Sayles on Pexels.com

Ravi and Marie followed Vita home in Ravi’s car, the rusty brown Honda civic was reliable even though it had holes in the fenders.  Vita was worried about noises she heard outside at her home, and Ravi was going to help investigate by hiding a motion-activated wildlife camera outside her home.  If someone was prowling her house at night, the camera would take a video and prove it and maybe identify the prowler.

Vita parked in her driveway, and Ravi parked in front of her house. Vita’s home was lovely older white wooden house about 25 years old, with blue shutters beside the windows and flowers alongside the sidewalk. A wrap-around porch was at the front of the house and it overlooked the lawn and the street. Ravi and Marie imagined it was relaxing to sit on the porch in the warm weather. The yard had a beautiful oak tree that towered over the porch with a clear view of the house front door.

Ravi used Vita’s stepladder and climbed up to the top step to place the wildlife camera about 8 feet (2.5 metres) above the ground. The camera hung on two nails he pounded in and he aimed the camera lens at the house porch and front door.

“The camera is designed to video animals without scaring them, it works silently, and is activated by movement Vita”, Ravi explained.  “I have put the camera up where it will be in the dark, but it is designed for filming in the forest with no more light than the stars. I can come back tomorrow and see if we film anything, it can be set off by raccoons, so it will certainly work to see if anyone is around your house at night.”

Vita thanked him with a hug, and invited both Marie and Ravi inside, tempting them with coffee and cinnamon buns. At the mention of cinnamon buns, Marie blushed, and Ravi smiled.

Vita already knew of course that Ravi bought cinnamon buns regularly but did not know their significance to Marie.  Ravi wisely did not share his nickname for Marie was CB for cinnamon buns. That nickname was for Ravi and Marie alone.

They all went inside for coffee, treats and a tour of Vita’s house. 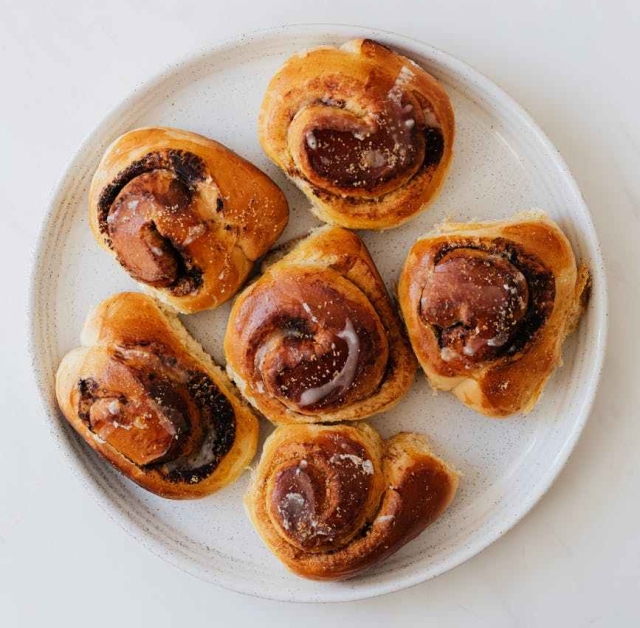 Photo by Karolina Grabowska on Pexels.com

Vita concluded her tour of her home in the kitchen where the coffee and treats were already waiting,  warm and wafting the scent of cinnamon and sugar.

Vita explained as she poured the coffee; “So you see, I moved to Gravelberg because I inherited this house from my uncle. It is a beautiful home but I will probably have to move into an apartment because I am so busy with my coffee shop.  I don’t have time to care for a house and yard and I don’t need so much room. I feel lonely in a big house, all alone.”

Ravi looked around, silently he wondered if Vita’s house was a solution to him. He was living in a small basement suite and wanted to move, but wasn’t sure how or if he should ask Vita if she wanted a tenant?  He would love to care for her yard, plus he could do the little do-it-yourself projects for her.

Marie was very quiet also, but her mind was racing ” I wonder if Vita would like a tenant here? I love this old house, and I hate living all alone also”.

An hour later, the three friends hugged and promised to have dinner tomorrow and check the camera to see it captured a video of the prowler. They might have to check more than one night just to be certain, a prowler would not be there every night, would he? Tomorrow for their potluck dinner Marie would bring salad, Ravi would bring fried chicken and Vita would provide french fries! Marie, Ravi, and Vita loved french fries with a little rosemary and baked in the oven.

Ravi assured Vita “the camera is aimed at your porch with a bulls-eye on the front door”,  and “if you feel nervous tonight, Marie and I will stay and keep you company tonight. I can see your couch folds down and I could sleep there.”

Vita hugged them both, with tears in her eyes, she thanked them, and asked them both to stay over.  She needed the sleep and it was a big house with 4 bedrooms and lots of room.

Later the three friends all relaxed and watched Henry Fonda, and Anthony Quinn in the old western movie “Warlock”.

It was nearly eleven o’clock when the lights winked out from inside the house and the only sound was crickets in the yard.

The only light from the streetlights, and peaceful.

Soon after they were all asleep

a blue pickup truck drove silently  past Vita’s house.  It paused on the street, the driver staring long and hard at Ravi’s Honda parked there, then the truck drove not too far down the street and parked, turning off the truck’s engine and lights.

The driver then walked purposely back to the Honda, and then systematically stabbed all four tires in the sidewalls, producing flat tires on all sides.

He stood there, his hands on his hips, breathing hard and holding the guilty screwdriver in his hand and then stomped back to his truck.

He then drove away, after spitting out the window, his only regret he hadn’t smashed the windshield also.

He pounded his fist on the steering wheel.

The camera was quiet, undisturbed on the oak tree the lens focused on the bullseye of the porch, all ready to capture movement of any kind.

It was still there, photographing Ravi when he left the house in the morning, and then returning 38 seconds later, to share his news to Marie.

I live in the South Okanagan. BC. I enjoy reading, exercise, toastmasters. spending time with my son, my daughter, & her husband , and my patient wife. I try to respond personally to every comment on my blog, and in this way I hope to get to know my readers a little bit and say thank you for their encouragement and suggestions.
View all posts by dfolstad58 →
This entry was posted in Just being creative, short stories and tagged bullseye, flat tires, french fries, marie, ravi, short story, Vita. Bookmark the permalink.