Maybe I should eat first

Two days ago, I woke up early, as usual, about sunrise and it was raining lightly so I decided a short walk for a coffee (a reward for getting up early and exercising) was in order.

Mornings are always nice in a small city like mine, it’s especially quiet and calm and I can mosey along alone with my thoughts.

My trip to the coffee place went as planned, one tall roasted coffee.   They don’t offer newspapers anymore to read,despite my written protest, so I read the news on my phone, and enjoyed a leisurely coffee just sitting looking out at the puddles in the parking lot.

On my return, taking a zig zag route, I was lost in my thoughts and I found I was standing quite close to four deer in a front yard.

This is not unusual in my neighbourhood, in fact if I don’t have deer in my yard at least once a day, that is unusual.  The deer were expressionless, big mule ears calmly watching me, their expression seemed to say “move along pal, or we were here first !” 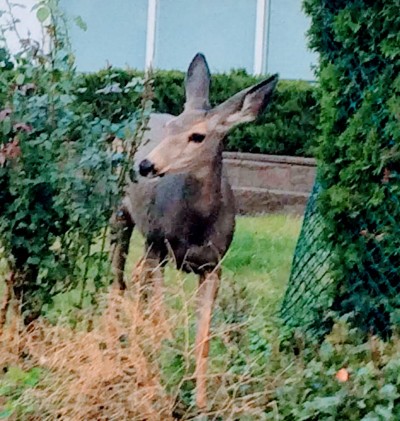 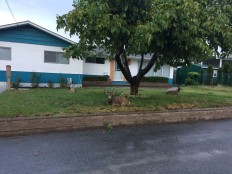 The male had a broken antler with something new, some plastic netting hanging on it, and the others were nibbling or relaxing, probably thinking about whose front yard they would invade next.

The next house had quail everywhere, on the grass, by the trailer, and then they panicked and flew up on the roof. Quail are super cute, and love watching them, but not Harvard graduates for certain.

As I wandered the last block in the light rain, I looked down and noticed quite a few long earthworms on the  road. I often pick them up on my driveway and throw them back on the grass so they don’t get run over or drown in a puddle they wander into. But on the  road, as there were lots of them so I left them.

Here is where my lack of breakfast maybe worked against me, as I will explain.

Harvey the earthworm, not the rabbit

I began to think about earthworms escaping water in the ground, only to be driven over in the road.  They can’t see so they act on instinct and just venture forth because they can’t stay where they are.

People do that too, jump from the pan, into the fire.  I call it reacting, not responding.  Reacting is instinctive, and often the mistaken action. Sometimes we react verbally, and that is problematic, because a reactive word can’t be unsaid, much better than reactive I think is a thought out response we don’t regret.

There you have it,  the meandering thoughts of a hungry walker in light drizzle, plus some wandering opinionated deer, and cute but clueless quail. The quail really are cute, especially when first born and they are like little cotton balls with legs almost invisible.

As always, I hope to hear from readers on ideas, suggestions and I appreciate you reading and following my blog.

I live in the South Okanagan. BC. I enjoy reading, exercise, toastmasters. spending time with my son, my daughter, & her husband , and my patient wife. I try to respond personally to every comment on my blog, and in this way I hope to get to know my readers a little bit and say thank you for their encouragement and suggestions.
View all posts by dfolstad58 →
This entry was posted in okanagan related, Thinking Out loud and tagged Deer, earthworms, puddles, rain, react, regret, response. Bookmark the permalink.

12 Responses to Maybe I should eat first