A very long time ago now, I was in grade 10 and I went to Vancouver Technical High School in East Vancouver, B.C.  Our class had the opportunity to raise money to travel across Canada and visit 3 cities. We did bottle drives mostly and some restaurants like Brother Jon’s in Gastown were very generous in donating beer bottles.

It was quite funny because we collected them, sometimes more than 100 cases at a time, and then stored them in my family’s garage. I wonder what our neighbours thought when they saw literally hundreds of cases of empty beer bottles temporarily stored in our garage.

Eventually we travelled across Canada,  it was 1973 and we travelled by train going East on Via Rail. Slow going from Vancouver until you get into the foothills of Alberta, really slow, but then you get on the prairies and speed up. The train was nice way to go because we were teens and almost constantly on the move I suspect. The train makes a nice sound moving along, and rolls back and forth. There was an observation car that we liked, and even the food was good. It was like camping on huge tubular tent.

The last stop in our visiting tour was Ottawa, and my favorite despite the accident I had. The streets were icy in the spring, and in Ottawa they had these backhoe like tractors that scraped the ice on the sidewalks. We were boarded in schools at night but had to be out of the gym and out early in the morning. One morning I was out walking early and one of these backhoes backed up suddenly while lowering his bucket and I put my hand to protect my head. The bucket just barely hit my hand but it did. My hand swelled up right away but denial set in also. I didn’t want anyone to know so I just hid my hand. That night one my teachers after the hockey noticed my swollen black and blue hand. I was taken to the hospital and they x-rayed it and I had broken some fingers and had some blood in there. They put my hand in a cast and I survived, I remember slow dancing to Bennie and the Jets (Elton John) with the cast on my arm while we were in Ottawa at a dance.  I could only slow dance I guess, so the girls danced all the songs slow with me. 🙂

I remember the cafe restaurant where we went in the mornings everyday had great breakfasts. We would go there and order eggs, sausage, toast and it was cheap, we were grade 10 students and cheap with lots of food was what we wanted.

On the table was a device connected to a slot machine, and you could pop quarters into it and the jukebox would play your choice. 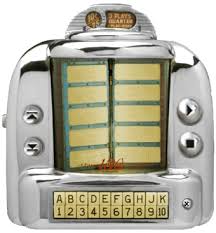 That was I first heard “Money” by Pink Floyd, I remember I really liked the song and played it almost every day while I eating greasy fried eggs and toast.  When I got home I bought the Dark Side of the Moon album.

Despite calling from across Canada to freak out my parents to let them know I broke my hand, it was good trip, Ottawa was interesting with lots to see. We flew home and I slept all the way, six hours, sleeping every night in a gym floor makes airline seats seem comfortable.

I have been back since to Ottawa  but I will never forget the first time because of the breakfasts, my broken arm, Bennie and the Jets, and Pink Floyd’s Money.

I live in the South Okanagan. BC. I enjoy reading, exercise, toastmasters. spending time with my son, my daughter, & her husband , and my patient wife. I try to respond personally to every comment on my blog, and in this way I hope to get to know my readers a little bit and and am able to thank readers for their encouragement on what they liked and suggestions on what they would like to see me try in order to improve.
View all posts by dfolstad58 →
This entry was posted in music related and tagged Breakfast, Canada, Pink Floyd, Vancouver. Bookmark the permalink.